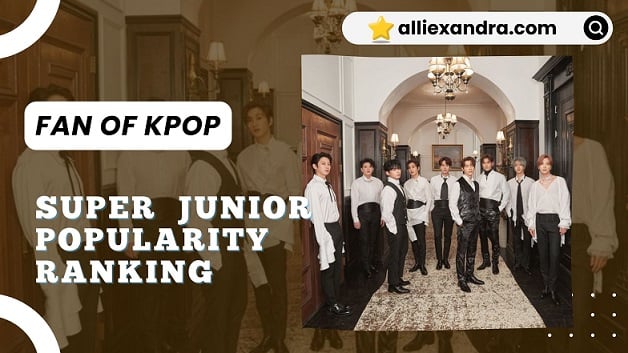 The prominent South Korean entertainment company SM Entertainment launched the boy idol group SUPER JUNIOR in 2005 as their first project. The group has also been known as the “King of Hallyu Wave” and one of the first KPOP boy group formed in the past.

In this post, I will introduce Super Junior Popularity Ranking of the members together with some facts about them. If you’re interested to know more about this ranking, scroll down and let’s find out who is the most popular Super Junior member at present!

What is Super Junior?

Super Junior originally consist of 12 member; Leeteuk, Heechul, Yesung, Shindong, Sungmin, Eunhyuk, Siwon, Donghae, Ryeowook, Henry, Han Geng, and Kyuhyun. However, the active members is only 9. There are no clear reason why Han Geng, Henry, and Heechul left the group but it is mostlt speculating that it is because of military enlistment.

Each member of the group is skilled not only in music and dancing but also in variety shows, and they frequently act as the show’s host or hostess either by being a regular participant on a variety show or by serving as an MC.

In addition, their concerts, which their loyal supporters nickname “Super Shows,” are so well attended and well-liked that people in many different regions of the world eagerly anticipate them. Suju, a popular national idol group that has been active in a variety of fields, is cherished by a great number of fans.

The name E.L.F. was chosen to be the fandom name for Super Junior on July 2, 2006.  ELF, which stands for “EverLasting Friends,” was chosen by Super Junior to be the term given to the band’s devoted followers all around the world.

The leader of Super Junior, Leeteuk, is credited with coming up with the term ELF. There is a connection between the meaning of ELF and fairies. Due to this reason, people who like Super Junior are sometimes referred to as “fairy.”

At each and every one of Super Junior’s concerts, the arena will be flooded with blue fairies, creating an ocean the color of sapphire.

Japanese people like Yesung’s unique character. When he speaks or moves, he loses his chilly demeanor and gives off a more warm impression, which is wonderful. His talent to sing is really good, and compared to the past, his performances have significantly improved in terms of visuals.

The well-defined, two-tiered face is like a magnet for the affections of young women, holding on to them firmly. He is one of the main dancers. In addition, he possesses a beautiful voice and is a skilled vocalist as well.

He has a tendency to become preoccupied and forgetful, which is another adorable trait of his. When he pulls his bangs all the way back, he has an edgy and hipsterish appearance, but when he wears his hair parted down the middle and permed, he has a stunningly attractive appearance.

When asked who in Super Junior had the finest dance moves, what answer did you give? It is highly likely that he will be selected. During his solo performance, he takes us to an awesome stage where dance is the primary focus of attention. Offstage, he plays the role of a teasing figure, which reveals his comedic side. The compassionate and warm-hearted manner in which he carries himself will quickly put you at ease.

He is a dedicated otaku who is held in high esteem even among fans of Japanese animation. His otaku episodes are never-ending; he writhes in pain when he hears moe speech mimed and sets anime-related ringtones as his phone’s default tone.

In addition, there is no denying the allure of his face. He is also very attentive to the needs of his followers, as evidenced by the time he rearranged his schedule to better accommodate their feelings after the news of his affair broke.  He has a charming personality and is adored by the junior girl groups!

Being a leader and host of several variety shows gives him the air of a reliable big brother.

In point of fact, though, he is a horrible crier and is prone to crying readily whenever he is confronted with emotionally charged situations. He is typically calm and authoritative, but there is something really endearing about the way he cries.

In addition to that, he is a highly keen and skilled dancer. He puts in a lot of work at the gym, and as a result, his abs are sometimes visible while he dances; when they are, he appears to be incredibly attractive.

Siwon is a conscientious individual who consumes English publications on a daily basis. He is also a talented singer and dancer, and he is increasing his activity as an actor by taking on leading roles in plays that are broadcast on television.

He is becoming an actor with many various faces because he not only plays serious roles but also plays the character of a handsome, handsome man who has a mischievous disposition. He is evolving into an actor with many different faces.

Ryeowook even has a charming and feminine sweetness in his facial expressions and mannerisms, giving him the appearance of being cute or rather girlish.

He has a great voice that is really high pitched and he has high singing talent. He is a very attractive man.

It’s possible that his fans fell in love with him because of his surprising tsundere personality.

He is Super Junior’s most talented vocalist overall. He is the main vocalist, and his voice can only be described as sweet and melting.

But when he talks, he comes out as a tough guy, and if you believe he has anything in common with Changmin from TVXQ, you should know that the two of them form a close friendship. Because of his inability to express himself, he is quite scary.

Shindong’s first career choice was not to be an idol but as a comedian. He is the one in charge of the comedy for the group, but he primarily performs as a solo performer in a variety of settings.

Since he is a very serious person, he had the notion, when he initially joined the group, that he might not be cut out for the role of an idol.

Although he has a bit of a rounder body type, he is a highly skilled dancer, and his quick moves are really interesting to watch.

He is so good-looking that many have referred to him as the “wonder of 1.3 billion,” and he is the coolest in performance; but, when he departs the stage, he reveals his naturalness by speaking in a broken version of Korean.

Even his conversation with Heechul was hilarious to listen to.

He used to be a member of Super Junior M. He has a wide range of talents, including the ability to sing and dance, play the violin, guitar, and piano, as well as speak English, Korean, and Chinese.

Every time he gives a solo performance, whether it was playing an instrument while dancing or playing the piano, fans look forward to it with great anticipation. He possesses an endearing quality similar to that of a younger brother.

Sungmin is the most awesome among the members, despite the fact that he is not a core member. Although he presents an air of tranquility, he has a very strong personality that makes some fans fall in love with him even more.

Who is the Most Popular Member of Super Junior?

The three most popular members of Super Junior include “Yesung,” a man who captures the hearts of women and is popular among the rear-end romance crowd; “Eunhyuk,” a man who is nicknamed the “Dancing Machine” for his overwhelming dance talents; and “Donghae,” a man who has the looks and wonderful voice of a Korean lad that K-pop fans admire.

After all, this ranking is done randomly to know which is the most popular member. I know that everyone that their own bias and it’s totally fine! Let’s show them our support and follow their official SNS accounts to be updated with their upcoming release and events!

Who is your favorite Super Junior member? Let us know your thoughts! 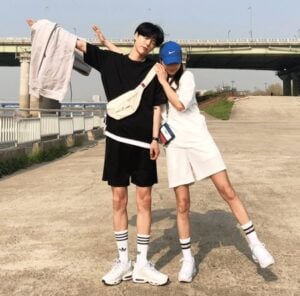 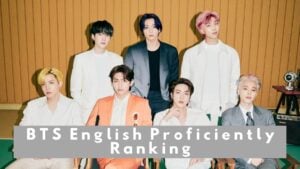 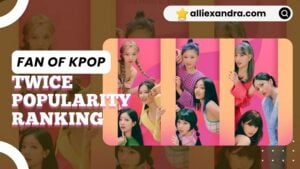