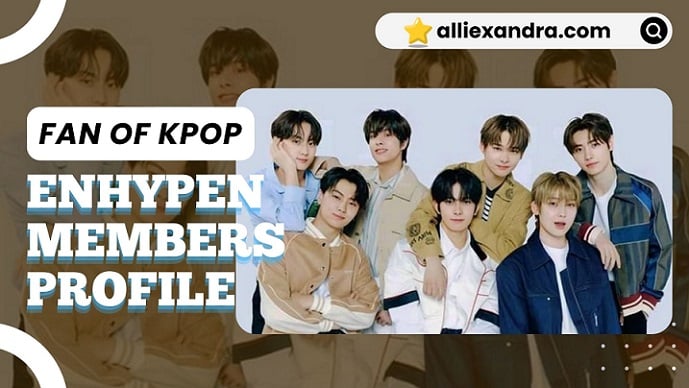 ENHYPEN  is a seven-member boy group belonging to BELIFT LAB.

The pronunciation of “ENHYPEN” is “en hyphen”, “en hyphen”, and in Korean, the group name is called “en hyphen”, but in this article, we will unify it with en-hyphen.

ENHYPEN was formed through the survival audition program “I-LAND” on September 18, 2020, and seven members, Heeseung, Jay, Jake, Sunghoon, Sunoo, Jungwon, and Ni-ki, were selected as members. They entered the K-POP world with their debut song “Given-Taken” on November 30, 2019!

ENHYPEN’s debut album recorded initial sales of over 280,000 copies, making them the leader of the 4th generation K-POP group.

If you’re interested to be a certified ENGENE (Enhypen’s official fandom name), scroll down to this post as I will introduce you to Enhypen Members Profile!

During the entrance exam for Hanlim High School, a famous entertainment school in Korea, he was scouted by many entertainment agencies and selected Big Hit from among them and has been training for about 3 years and 1 month.

Heeseung, who has been attracting a lot of attention since the first appearance of “I-LAND”, is a talented all-rounder and has a leadership role that is trusted by those around him.

In addition to dancing and singing, he also has an all-rounder side when it comes to musical instruments and sports! In addition, he has perfect pitch and can even match the pitch before going on stage!

Jay lived in the United States until he was 9 years old and is fluent in English. Also, he can speak Japanese fluently because he has been studying Japanese on his own since before his debut!

He has a straightforward personality and is honest with his feelings, such as a straight and hot man, so he has the characteristic of showing emotions on his face.

For that reason, in “I-LAND”, he revealed his unadorned personality and gained fans, but he also created an event called the black history!

The reason why Jay is said to be black history is that among them, from the words ” grudge (원망), anger (분노), shame (수치심) “, the nickname “Wonbunsu” (원분수) is attached!

Now, both himself and the members are known as the official black history maker, and he is established as ENHYPEN’s teased character!

It’s true that even though there are gaps, he has masculinity just like his cool appearance! He invited Niki, a member who couldn’t go back to Japan on New Year’s Day, to his family’s house so that he wouldn’t feel lonely, and spent time with him.

Jake was born in Korea and raised in Australia. He could play the violin and had many friends, and he liked to exercise and often played soccer with his friends!

Although he had a fulfilling life in Australia, he decided to go to South Korea by himself to pursue his dream of becoming a singer. He knew that he would have a hard and lonely life until his debut, but it was BTS that moved Jake.

He became a fan of BTS after seeing BTS’ “DNA” on an American billboard and dreamed of becoming an idol himself.

Appeared in “I-LAND” in just 9 months as a trainee. Due to his inexperience, there were some awkward parts, and the initial evaluation was not high. However, as the test progressed, his ability increased and he was fascinated by the surprising growth speed!

He was able to improve my skills in a short period of time because of his desperate efforts to practice during breaks and stoic attitude that never gave up. Even after debuting with ENHYPEN, he worked so hard that he was called a “practice bug” and his growth speed hasn’t slowed down!

Sunghoon was active as a figure skater for about 10 years from 2010 to 2020. He was a figure skater who was expected in the future because of his ability to win prizes at Korean championships and international competitions.

After receiving many scouts from entertainment agencies through Instagram DMs, Sunghoon, who belongs to Big Hit Entertainment, will be a trainee while doing figure skating.

It is said that he was a trainee from the afternoon until the evening, while figure skating in the morning.

After devoting his time to figure skating for about 10 years, he decided to retire in 2020 to focus on his trainee activities and appeared in “I-LAND”.

Sunghoon has the best looks in ENHYPEN and was selected as the No. 1 visual chosen by the producers and participants.

The attitude of practicing hard that hasn’t changed since his figure skating days has been an encouragement to those around him, and he’s been praised for his diligent personality!

He has been popular since his school days and has been scouted by entertainment agencies many times through Instagram DMs. He had liked singing for a long time, but he had given up on his dream of becoming a singer because of his voice change period.

However, after receiving a scout, he challenged various auditions and was selected as one of 5 successful applicants out of about 200 participants and belonged to BELIFT LAB.

Appeared in “I-LAND” in just 10 months as a trainee. In particular, Sunoo stands out for his ability to manage facial expressions.

Sunoo has a bright personality and always smiles and he is also in charge of ENHYPEN’s charm!

Jungwon is the leader of ENHYPEN.

He has been doing taekwondo for about 4 years since he was 7 years old, and was able to win a prize in a competition. However, when he was scouted by SM Entertainment, he quit taekwondo and became an SM trainee.

After that, his friend’s Big Hit trainee mother showed Jungwon’s photo to the Big Hit casting team, so he transferred to be a Big Hit trainee, and after a total of more than 4 years of training, he joined “I-LAND”.

At the time of the audition, he was 16 years old, and despite his young age, his mental age is impressive. Even if he received a bad evaluation from the producer, Jungwon showed a positive attitude to find improvement points and have the idea of ​​​​cooperating with his colleagues to solve the problem!

Many people point out that Jungwon has many habits, such as pulling the hood, pulling down the sleeves of his clothes, moving his eyebrows, and turning his palms up when he sits down. If you keep looking closely, you may discover new habits!

Niki is one of ENHYPEN’s famous dancers who started dancing when he saw a DVD of Michael Jackson when he was only 3 years old.

In 2017, he had the experience of performing as a SHINee kid at SHINee’s Tokyo Dome performance. At that time, He was moved to stand on a big stage for the first time and had a dream of “I want to stand here again”.

Considering the current popularity of ENHYPEN in Japan, the Tokyo Dome performance will not be too far away. In “I-LAND”, he showed overwhelming dance skills and was highly praised by the participants and judges.

While other trainees take an hour to learn the choreography, Ni-ki is a dance copy genius who can learn it in just 10 minutes! He is a reliable maknae who leads everyone during choreography practice for ENHYPEN members, who are all older than him!

Ni-ki was highly evaluated for dance, but his vocal pitch and facial expressions were pointed out. Considering that he just came to Korea in August 2019 and learned Korean in less than a year and that he was in the middle of his voice change period, he may not have been confident in his singing.

In order to improve his vocal skills, he worked hard at voice training and showed how he grew as the audition progressed. In the final stage, he became a member of ENHYPEN because he improved his vocals, Korean language, and facial expressions!

Speaking of maknae (youngest) in a K-pop group, the is loved by the older members and has a lot of charm! Ni-ki is also one of those maknae-like people, but he has a shy personality, and the way he shows a shy side after being charming makes me cringe!

How to Recognize ENHYPEN Members

The youngest member, Japanese Ni-ki, is distinguished by his elongated eyes and the mole on his chin.

Jay, who is said to have the most memorable face in ENHYPEN, is called a Yankee face.

Sunoo, who has a fox face, has brown and transparent eyes.

Leader Jungwon has round eyes, dimples, and a cat face. By the way, he is allergic to cats.

Sunghoon, who was active as a former figure skater, is sometimes called “Korea’s Yuzuru Hanyu”. The mole on his nose is his charm point!

And it is said that the two, Heeseung and Jake, are very similar.

Heeseung has a deer face and Jake has a dog face. Heeseung with sharp eyes and so as Jake. Compared to Jake, who has normal ears, Heeseung’s ears are protruding.

What is ENHYPEN’s Member Color?

ENHYPEN’s member colors have not been officially decided, so we will introduce the colors expected by the fans!

Based on what ENHYPEN members often wear during their activities, it is expected to be the above colors.

The following are ENHYPEN’s official SNS and check the latest information as soon as possible!

The 7-member boy group “ENHYPEN”, which was born in I-LAND, debuted with a threatening record that can not be thought of as a newcomer, with initial sales of the debut album released on November 30, 2020, exceeding 280,000.

In 2021, they were selected as a rookie group selected by the American “TIME” magazine, and they have already made their debut in Japan and appeared on music programs, gaining global support!

ENHYPEN’s activities are attracting attention as a group representing the 4th generation of K-POP!